This sums up my past month involvement with the project. A lot of reading in between...

I added a changelog so that the changes are easily seen, so here it is (this week is v 0.9.1):

You should notice some version numbers. That's also a new addition and every week I will deploy a new version, so eventually at some point in the end of the summer, version 1.0.0 will be released.

Missing: A bunch of code still needs testing, rspec is not enough to properly test api calls. I will use vcr and webmock in the future to cover these tests. Integration tests are also not complete yet.

Previously it parsed the spec file and checked the first email in the changelog. Co-maintainers have also the ability to build a package and in that case it shows wrong info. Another case is where a user changes their email they are taken into account twice, so when hitting /by_owner not all packages are shown. I was hit by this bug.

It now fetches the owner's fas name using pkgwat which I use to sort by owner.

The current implementation scraps the SPEC file of a rubygem via the gitweb and then stores the dependencies. The problem is that when one uses gem2rpm, ~> is expanded to >= and <=, which leads to list some dependencies twice. 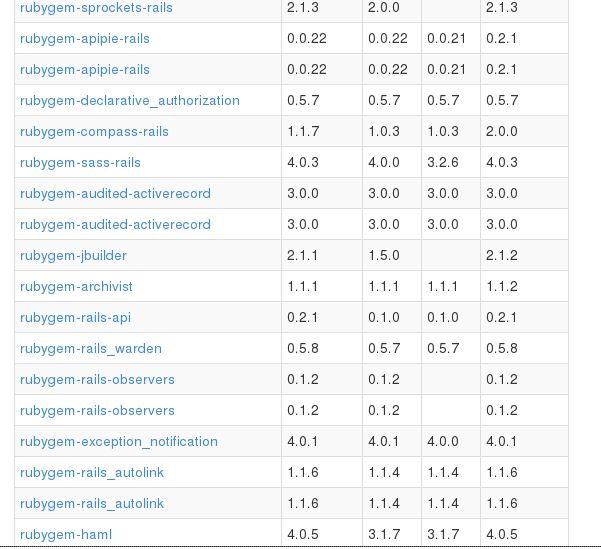 The fix was quite easy. Here is the controller that is in charge for the show action:

All I did was to add uniq.

In a gem page you could see this: 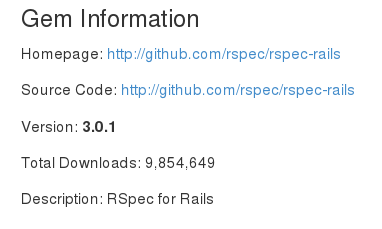 The information is taken from the https://rubygems.org api. Some have the same page for both gem's homepage and source uri. The secret was lying in the [view][].

All I did was to change this from this:

So now it skips showing the homepage if it is the same as the source uri.

I added some more information at the fedorarpm page. Now it shows, last packager, last commit message and last commit date. Useful if something is broken with the latest release and you want to blame someone :p

And since many times a package has many co-maintainers you get to see the real last packager.

Here's a shot of the page as it is now:

As I have made some major refactoring in the fedorarpms model, I split many methods to their own namespace. For example, previously there was a single method for importing the versions and dependencies, now they are two separate.

As a consequense, I added rake tasks that could be invoked for a single package. Also the namespace is now more descriptive.

The tasks are for now the following:

That was it for now. For any changes be sure to check out the changelog regularly!